Game of the day:

Halloween Chronicles: Behind the Door Collector's Edition
It's Only a Game… Right?

Amazing Pyramids
Unravel the secrets of an ancient city!

Poker for Dummies
Learn when to hold `em and when to fold `em!

Gems of the Aztecs
Find the treasure of the ancient Aztecs!

Love Ahoy
Create romance on your own cruise line! 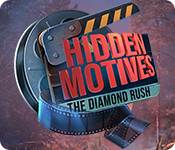 Domini Games debuts an exhilarating new series in Hidden Motives: The Diamond Rush! It's the Wild West, and you're the sheriff's daughter! Or at least you're playing one as the lead in a movie. But what should be the role of a lifetime becomes more than you bargained for when you're transported into the film itself! The city of Redsand is plagued by bandits, and a recent string of murders has residents blaming the fabled Diamond Ghost. You’ll need to play your part perfectly to uncover the truth and get back home before it's too late! Do you have the chops to get the job done? Find out in this sensational Hidden-Object Puzzle Adventure!

Can you solve a ghostly mystery to escape a film?